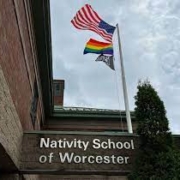 Recent articles about Bishop Robert McManus ordering Nativity School to take down its BlackLives Matter (BLM) and gay pride flags have caused quite a stir in our community. BishopMcManus suggests that flying these flags at a Catholic institution may promote an image ofinconsistency with Catholic teaching and Catholic identity. But it’s just as likely that these flagsremind people of core Catholic values which recognize each person as created in the image andlikeness of God with an inherent human dignity that is to be respected and protected.

When I see Nativity’s BLM flag, I’m reminded of Catholic leaders who have endorsed the BLMmovement and joined with it here in Worcester and across the nation. I think of leaders likeBishop Mark J. Seitz of El Paso, TX, who knelt at a BLM vigil holding a “Black Lives Matter”sign. I think of Sister Josita Colbert, SNDdeN, president of the National Black SistersConference, who stated in a letter to an archbishop, “Black Lives is a racial justice movement…agospel movement…. It is a movement very much in the tradition of Catholic Social Teaching.”

When I see the gay pride flag flying, I think of Catholic leaders who affirm members of theLGBTQ+ community as made in the image and likeness of God. I think of the nine bishops whoissued a Jan. 2021 statement saying “We… say to our LGBT friends, especially young people,that we stand with you and oppose any form of violence, bullying or harassment directed at you.Most of all, know that God created you, God loves you and God is on your side.” I think of Sr.Jeanine Gramick, SL, who has worked tirelessly for 50 years to promote the acceptance of gayand lesbian people as full and equal members of religious, civil, and social groups, and whorecently received a commendation from Pope Francis for her work.

These leaders remind that I am part of a national Catholic Church that includes many voicesraised in support of BLM and gay pride.

According to a 2020 Pew Research survey, 77 percent of Black Catholics believe thatopposing racism is essential to their faith. A 2019 Public Religion Research Institute surveyfound that 72% of Hispanic Catholics, 71% of white Catholics and 68% of other non-whiteCatholics support laws protecting LGBT people from discrimination.

I have a longstanding affiliation with Pax Christi USA (PCUSA), a 50-year old national Catholicpeace and justice organization of lay women and men, women religious, priests, deacons,brothers, bishops and Catholics of all stripes whose president has always been a bishop. Rootedin gospel nonviolence, PCUSA rejects every form of violence and domination, includingpersonal and systemic racism, and represents the voices of thousands of Catholics. Its websiteincludes these statements of principle:

“As a community of conscience, we assert that Black lives matter and that the violence inherent
in systemic racism is an affront to the God who creates, redeems, and sanctifies all, and calls us
together as one family.

As a community of conscience, we affirm the right of LGBTQ people to equality, which includes.. a cultural and religious transformation to celebrate every person’s sexual orientation andgender identity as being made imago Dei.”

These principles, written before the 2020 national elections, affirm the importance of Catholicsstanding in solidarity with two disenfranchised groups seeking to have their human dignity andcivil rights respected.